Menu
back to all

REDI researchers will have up to four years to complete their PhD, all while working with leading European research and academic institutions across 10+ countries, networking with academic and industry leaders from 60+ supporting partners, as well as gaining enviable international experience and sought-after You will also spend up to one year at RMIT University in Melbourne, Australia, have opportunities of annual training weeks in Barcelona, Spain, and receive an attractive salary package.

“We are very proud to be setting a new standard. This is a program launching research careers and the co-funding from the European Union´s prestigious Marie-Sklowdowska-Curie program underscores this vision,” said Marta Fernandez, RMIT Europe’s Executive Director.

REDI researchers will set themselves apart by fast-tracking their careers and having the possibility of being awarded dual doctorates, as well as becoming part of a new generation of researchers who can rise to the world’s challenges and create positive societal change through impactful research.

After an impressive response to the first and second call of the program, REDI has received applications from over 1,000 international students from around the globe.

Now REDI is in its third call of applications, which opened on 20 July 2022 with 12 new positions.

Get REDI and don’t miss this once-in-a-lifetime chance to advance your career.

For more information on the positions, eligibility criteria and the selection process, please visit www.rediprogram.eu

REDI is led by RMIT Europe (Spain). RMIT Europe is the European hub of RMIT University (Australia), a global university of technology, design and enterprise.

RMIT is a global university of technology, design and enterprise, ranked in the top 20 universities under 50 years old in the world. World-class people, leading edge resources, collaboration with industry partners and multi-disciplinary approaches are just a few of the trademarks of research at RMIT, which boasts almost 90,000 students and campuses in Australia, Vietnam, a centre in Spain, and research and industry partners on every continent. Find out more: rmit.edu.au

For further information and updates:

REDI has received funding from the European Union’s Horizon 2020 research and innovation programme under the Marie Skłodowska-Curie grant agreement No 101034328.

Are you REDI to change the world? RMIT launches innovative new global PhD program from Europe

Media release | 01 October 2021 Our fast-changing world needs a new generation of researchers who can rise to the challenges ahead. The REDI (RMIT European Doctoral Innovators) program, a 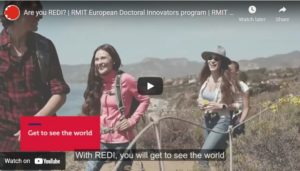 Are you REDI? Video now live!

Want to know more about REDI? Check out our video! Special thanks to research partners 5th Studio, Aalto University, Kassel University and the Artificial Intelligence Research Institute, IIIA-CSIC for their 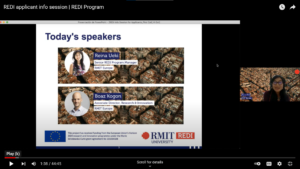 REDI to apply? Watch this first!

The video of the information session for REDI applicants is now online!  It’s a good way to get an overview of the program, the application process and hear questions from 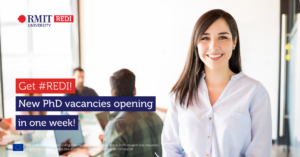 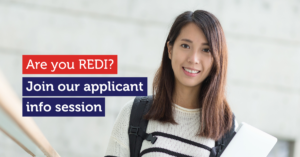 Get #REDI and solve all your questions in our info session for applicants!

We hear you, finding the right PhD position and going through the application process can be overwhelming! That’s why next Thursday 31 March at 3PM CEST we will hold an

Do you have questions about REDI? Watch this video!